Asthma is a complex condition involving immune system dysfunction and characterized by airway inflammation and hyper-reactivity. 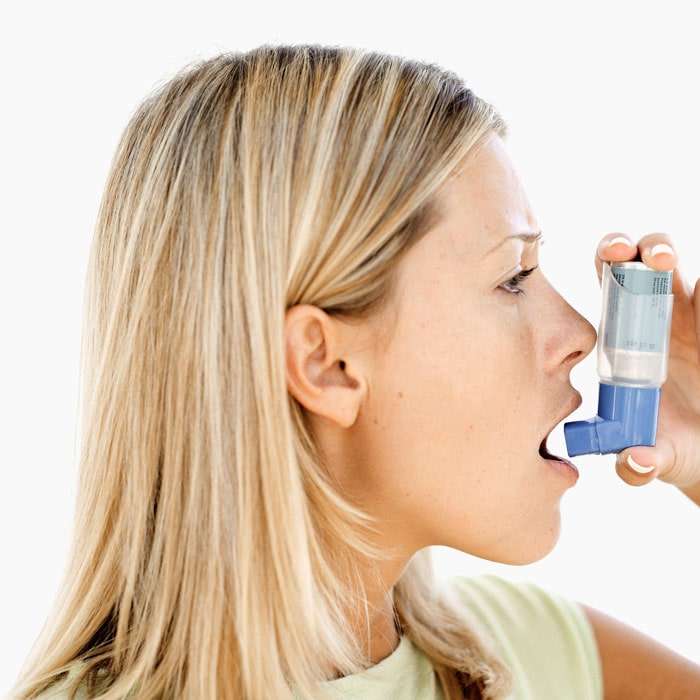 CHINESE ETIOLOGY: Asthma can be defined as an “excess” condition which is due to exogenous pathogenic factors or as a condition of “deficiency” if there is weakened body resistance.

Wind-cold type: Asthma due to invasion of wind-cold; which impairs the smooth flow of the lung qi, injures the skin and hair, and makes the pores closed. Since the lung and the superficial defensive system are weakened, the lung qi fails to disperse and descend, leading to a cough. Signs: Cough with thin sputum, rapid breathing, chills, fever, headache, no sweating at early stage.

Phlegm-heat type: Asthma due to failure of the Spleen in transformation and transportation, resulting in production of phlegm from the accumulated dampness. Long-standing retention of phlegm turns into heat, or excessive fire of the lung evaporates the fluids into phlegm. When the phlegm fire stays in the lung, the lung qi is stagnated and the normal activity of the lung is impaired. Failure of the lung qi descending function results in asthma. SIGNS: Rapid and short breathing, strong and coarse voice, cough with thick yellow sputum, sensation of chest stuffiness, fever, restlessness, dryness of the mouth.

Lung deficiency: A prolonged and protracted cough can weaken and injure the lung qi. Overstrain and internal injury can also bring about deficiency of the lung qi. In either case, shortness of breath and difficult, labored breathing may occur. SIGNS: Short and rapid breathing, feeble voice, weak and low sound of coughing, sweating on exertion.

Kidney deficiency: Overwork and sexual indulgence can injure the kidney. A severe or chronic disease weakens the body resistance and damages the essential qi. Long-standing asthma also affects the kidney. Failure of the kidney in receiving qi may give rise to asthma. SIGNS: Difficult, labored breathing on exertion after long-standing asthma, severe wheezing, indrawing of the soft tissues of the neck, short breath, fatigue and weakness, sweating, cold limbs.

Herbs we have at Lakewood Community Acupuncture for Asthma

INDICATIONS: Allergies and Asthma. Contains: (approx) 20% Pneumotrophin PMG, 20% Drenatrophin PMG 20%, Cataplex A-C 20%, Betacol 20%, Antronex Developed in 1959, Allerplex is a “formula” or combination product. Since patients have several different types of allergies, the practitioner may need a broad type of product to address the different causes or individual constitutional deficiencies that often underlie the expression of the allergic response. Built from the original ingredient Yakriton, a liver fat extract, also found in Antronex, nutrients in Allerplex also support lung, adrenal and liver tissues as well as their functions. The whole food vitamins A and C with cofactors support the immune system, in particular the mucous membranes. Antronex + Allerplex for sinusitis and allergies: Antronex dilates the portal vein and drains histamine, Allerplex has Antronex in it, as well as other things like Fenugreek, which breaks up mucus. Cataplex F, Calcium Lactate and Cataplex C are the Triad of the Immune system. Calcium is distributed around the body by Essential Fatty Acids (Cataplex F) marking the virus and Vit C tells the body to fight.

INDICATIONS: Alkalosis, joint pains, bursitis, allergies, asthma, system acidifier. The acid-alkaline balance is very important in maintaining proper body function. Alkalosis is involved in conditions of asthma, allergies, arthritis, bursitis, infections, etc. If the fluid of the body is too alkaline, calcium precipitates out of solution and forms deposits in various places throughout the body.

Sarah
Emily helped me combat some pretty deep depression and anxiety yesterday. I had come to my wits end and western med was no longer helping me. She recommended herbs that are significantly decreasing the debilitating mental health symptoms I was experiencing and her treatment of acupuncture/reiki helped calm my nervous system. I’m noticing this all in less than 24 hrs, wow! THANK YOU 🙏

Lindsay Hovland
I received a healing treatment from Crystal yesterday and the day before— acupuncture and cupping, along with ear seeds. She was so attentive and deeply caring for my personal needs and desires. I genuinely cannot wait to go back. Truly, it is honorable they are a non-profit organization for all the hard work and hours they put in. I will always go back. Thanks to the hardworking (shen) hands of Crystal.

Melissa Bell
Would recommend! Very professional, clean, empathetic, experienced. Seen Jamie a few times and he's wonderful. Acupuncture can help with almost anything along with their other services.

Tammy Osolinski
Brought in my 15 year old who was suffering from a sports related back injury. She has had two appointments (acupuncture and acupuncture with cupping) and has been experiencing good results. The healthcare team is extremely knowledgeable and comforting. They explain everything they are doing and ensure you are comfortable with every step. Would definitely recommend.

Jay Clement
I've been to other acupuncturists before, and Emily @ Lakewood did a fantastic job - way better than the others I've been to. Very thorough on intake, learning what to focus, and overall creating a great space. Thanks so much!

Shawna Seldon McGregor
Lakewood Community Acupuncture is amazing! I've received acupuncture, cupping and bodywork here. It was an outstanding experience. I felt amazing when I left and it addressed my chronic pain. I highly recommend LCP!

Coleen C
Amazing practitioners who are dedicated to serving the community with powerful healing! Each session is greeted with compassion and incredible care. I came to the office experiencing a lot of pain in my back and neck. The day after receiving Tuina bodywork and Acupuncture, my pain was gone. I am so very grateful. Thank you!!

bic109
I've been here a couple times and both were great.
Google rating score: 5 of 5, based on 47 reviews

Check out our Featured Artist!