How Can Tuina Bodywork Benefit You

Tuina bodywork is a very powerful therapeutic modality used at Lakewood Community Acupuncture before an acupuncture session to warm up the channels and energy of the body and make the acupuncture treatment more effective. The patient leaves clothing on for the treatment and the acupuncturist works along the meridians of the body through compressions, rolling, plucking, rocking and kneading (similar to shiatsu). Patients receive bodywork the first ten minutes of the session to stimulate certain meridians and points. Then acupuncture is administered and patients are left to rest an additional 20-50 minutes with the needles in place. For those who don't want/need acupuncture, we also offer Tuina Bodywork and Cupping Therapy together. What is Tuina Bodywork?

Tuina Bodywork Therapy is a traditional Chinese bodywork modality that is its own unique bodywork system dating back thousands of years, from which many modern massage and chiropractic techniques stem from. Despite some similarities to western massage, the intent of Tuina Bodywork Therapy is more specifically therapeutic and incorporates theories and diagnosis techniques found in Chinese medicine in conjunction with modern anatomy and physiology. Occasionally, liniments and oils are used to increase blood circulation and healing, as well as other therapies like cupping and guasha.

Tuina tends to be a vigorous, deep tissue therapeutic bodywork. Techniques include: gliding (effleurage), kneading (petrissage), percussion (tapotement), friction, pulling, rotation, rocking, vibration, rolling and shaking. These techniques are performed for approximately ten minutes, prior to an acupuncture treatment while the patient is fully clothed.

note: Tuina is only offered with acupuncture or cupping as an add-on 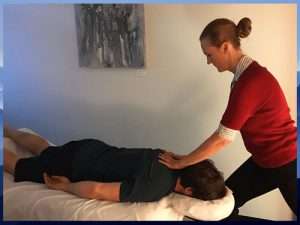 Verified
Lakewood acupuncture isa great to help relieve pain and stress. Just after my first visit I immediately had less pain and more flexibility. The new office is super clean, very bright and private. Consistently have visited in the last several weeks and have seen dramatic results all therapist are extremely knowledgeable and friendly. Is hidden gem will change your life!

Matt Luby
Verified
LCA truly is wonderful. Jamie is incredibly intuitive with his acupuncture practice. As someone with chronic back pain, I am incredibly grateful of his expertise and caring touch. Their space is clean, safe and welcoming. Keep up the great work! You are appreciated!

Rachel Rowland
Verified
Jamie and Crystal are amazing practitioners! They are so knowledgable, warm and thorough. Their space is very relaxing and comfortable. I highly recommend LCA!

Katie Cleveland
Verified
I have been seeing Jamie Holland for more than a year now and he is truly amazing. I work with my hands constantly and can honestly say he is the reason I can keep working without pain. Always great energy, great acupuncture and great cupping. He is incredibly detail oriented and has such a high level of compassion. Can’t recommend Lakewood Community Acupuncture enough!

Jacob Cohen
Verified
Jamie is one of the BEST acupuncturists I have ever worked with. Always calming and good hearted, he is a great energy to be around. Also always sleep better and feel less stressed after my appointments. I recommend everyone I know to see him!

Anna Miller
Verified
Jamie (co-founder + practitioner) is an incredibly kind and effective healer. As a person with three chronic infections, I am usually pretty hesitant to seek out new treatments. I am so glad I got over my fear and made an appointment with Jamie, however, because I finally feel like both my chronic pain and fatigue are much more manageable. Thank you for all you do, Jamie! I am beyond grateful for you and Lakewood Community Acupuncture as a whole.

Zascha Samuels
Verified
Crystal is sweet, knowledgeable, empathetic, nurturing and provides so much love in her acupuncture sessions here. I’ve been going here for months and I love the energy and intention of the space. Highly recommend!

Sara Watt
Verified
I went in for my first-ever acupuncture treatment, and Jamie was amazing! He was so helpful and thorough, and took the time to explain exactly what he was doing since I'm new to the practice. I also tried cupping for the first time here as well, and I noticed an immediate difference after the session. I'll definitely be back!

Check out our Featured Artist!